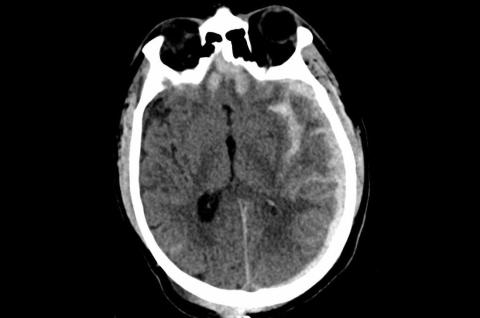 Blood tests taken within 24 hours of a traumatic brain injury (TBI) flag which patients are likely to die and which patients are likely to survive with severe disability, according to a study headed by UC San Francisco, the University of Pennsylvania and the University of Michigan. Their results – available within minutes – may confirm the need for prompt surgical interventions or may help guide conversations with families in cases of devastating injury.

The tests, which detect two protein biomarkers, were cleared by the Food and Drug Administration in 2018 for use in determining which patients with mild TBI should undergo CT scans. High values of these biomarkers, GFAP and UCH-L1, correlate with death and severe injury, the authors state in their study publishing in The Lancet Neurology on Aug. 10, 2022.

Co-senior author of the study, Geoffrey Manley, MD, PhD, professor and vice chair of Neurosurgery at UCSF, said these blood tests are “both diagnostic and prognostic,” as well as easy to administer, swift and inexpensive.

In the study, researchers from TRACK-TBI, a UCSF-led brain injury research initiative, examined the day-of-injury blood tests of 1,696 patients with TBI, using the Abbott i-STAT Alinity, a portable blood analyzer, and the ARCHITECT assays. The results of these blood tests were compared at patients’ six-month assessments, using the Glasgow Outcome Scale Extended, which grades outcomes and quantifies levels of disability following TBI. These outcomes range from death (level 1) to complete recovery with resumption of normal life but minor deficits in some cases (level 8).

Approximately two-thirds of the patients were male, and their average age was 39. They had been evaluated at 18 Level 1 trauma centers for injuries caused primarily by traffic accidents or falls. At six months following injury, 7% of the patients had died, 14% had an “unfavorable outcome,” with level 2 to 4 injuries ranging from vegetative state to severe disability requiring daily support. The remaining 67% had “incomplete recovery” ranging from moderate disabilities requiring assistance outside of the home to minor disabling neurological or psychological deficits.

“We believe this tool may encourage clinicians to be more aggressive in their decisions to begin or continue life-saving treatment,” said Manley, who is the principal investigator of TRACK-TBI and a member of the UCSF Weill Institute for Neurosciences. “Modern trauma care can result in good outcomes in what we had once believed were non-survivable injuries.”

The blood tests may also guide discussions with families in the cases of catastrophic injuries, he said, and assist in “mass casualty situations where they may play a critical role in triage and resource allocation.”

This study is the “first report of the accuracy of a blood test that can be obtained rapidly on the day of injury to predict neurological recovery at six months after injury,” said first author Frederick Korley, MD, PhD, associate professor of emergency medicine at the University of Michigan. “Although there have been previous prognostic studies, they have used a limited number of patients, which can result in imprecise estimates.”

The researchers wanted to see if accuracy in predicting outcome would be boosted if the two blood tests were done together and combined with prognostic models that looked at variables like age, motor score, pupil reactivity and CT characteristics. They found that in patients with severe and moderate TBI, the accuracy of predicting death and severe disability increased to 94% and 89%, respectively. But in patients with mild TBI, the probability of predicting complete recovery versus incomplete recovery increased only to 69%.

Structural brain injury detected by CT and MRI has been reported as an independent predictor of risk of moderate and mild disability in mild TBI, noted co-senior author Ramon Diaz-Arrastia, MD, PhD, professor of neurology at the University of Pennsylvania’s Perelman School of Medicine and director of the Traumatic Brain Injury Clinical Research Center at Penn Presbyterian Medical Center.

“Therefore, although structural brain injury, as measured by GFAP and UCH-L1, as well as CT scanning, may play a predominant role in determining poor outcome in moderate and severe TBI, mechanisms of injury relating to poor outcome after mild TBI are not yet fully understood,” said Diaz-Arrastia, noting that further study would be required to reproduce these findings.

TBI is a heterogenous condition that requires a “rich and diverse dataset like that of the TRACK-TBI study,” said Nsini Umoh, PhD, Division of Neuroscience program director at the National Institute of Neurologic Disorders and Stroke, which funded the study. “One aim of TRACK-TBI is to develop better prognostic tools for TBI patients, which could help predict recovery trajectory and inform therapeutic options.”

Co-Authors: For a full list of authors, please refer to the study.

Funding: TRACK-TBI is sponsored by the U.S. National Institutes of Health, National Institute of Neurologic Disorders and Stroke (Grant # U01 NS1365885), U.S. Department of Defense; Abbott Laboratories, One Mind.